In our initial internet of things (IoT) opening post,  we said that many of the existing IoT solutions shared a common architecture. This post looks at the challenges in using one of those pieces of the architecture – the ease of use of an “off-shelf” cloud compute platform. 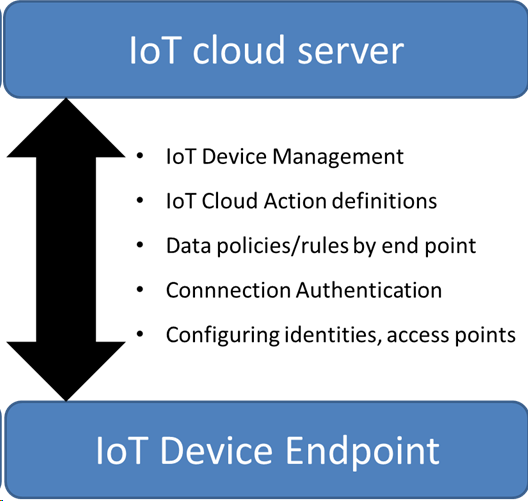 The essentials of an IoT system comprise of a few basic epics/user stories:

In this initial approach to the AWS IoT platform, I concentrated on topics 1-3 and left aside the practical deployment issues for the present.

In summary, I would say that I like the Amazon approach to addressing these issues, as in a way they are the table stakes, with the main IoT value creation around what is being measured/monitored and how the data obtained is being intelligently used and combined to provide benefits.

My experience of the Amazon IoT system has focused on the IoT SDK and backend, specifically the python and embedded C versions and trialling the basic data publish/subscription over MQTT. In terms of positives & negatives:

Other than these initial problems, probably due as much to my own specific knowledge base, the AWS offering looks good in terms of getting started fast and providing the basic plumbing for an IoT system. Ian Massingham gave a good presentation on AWS IoT at Hardware pioneers in October.

Naturally AWS are looking to monetise IoT through use of their other cloud assets, storage, processing, machine learning and it will be interesting to compare in another blog against Windows Azure IoT which requires a chargeable server reservation for the right to use IoT.

I can now take back some of what I said earlier about the difficulty of finding the allowable policy definitions for IoT devices interacting with AWS’s backend. They were there in the documentation if you looked for them.

Excluding the “shadow” (Amazon’s virtual copy of the IoT device to use when e2e connections are broken), there are 4 fundamental actions and 3 different types of resource to query the action against.

In summary of the policies:

And there seem to be plenty more policy resource query variations in the documentation available using “variables” for some more advanced use cases.