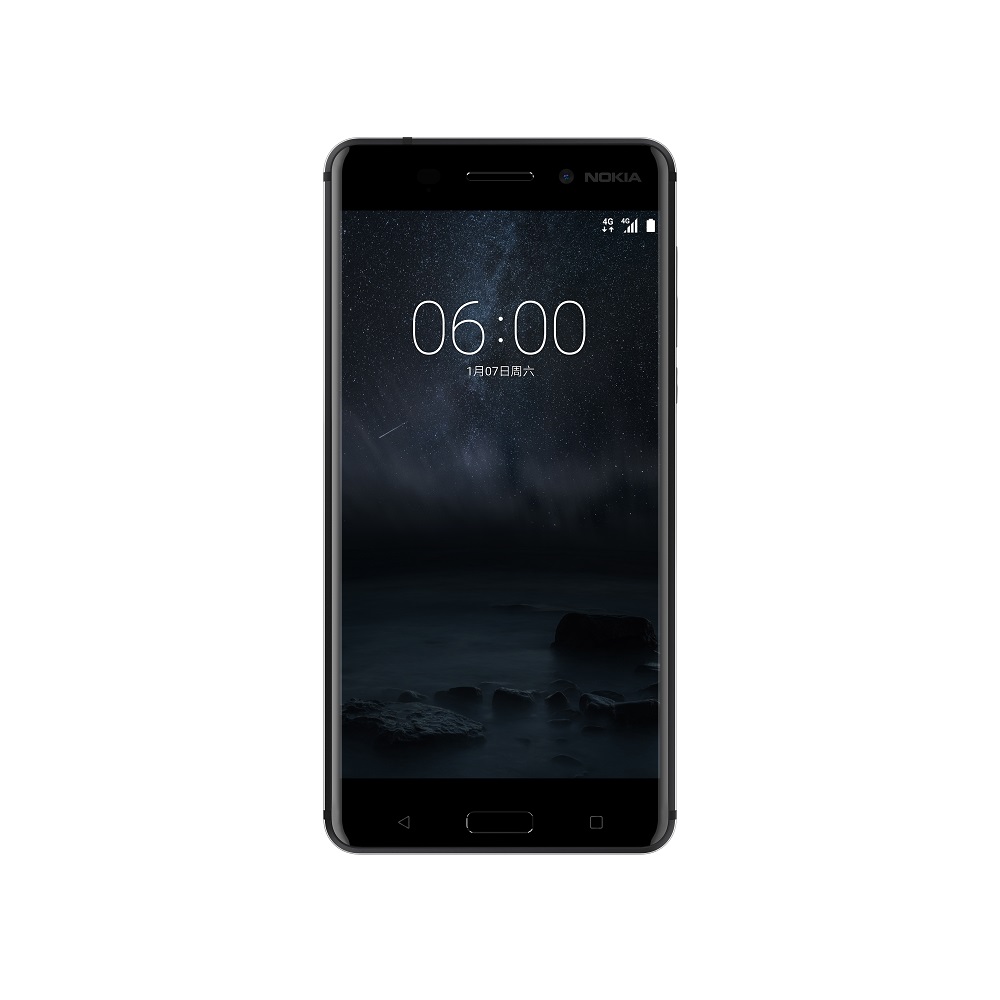 After largely disappearing from the mobile phone market following its acquisition by Microsoft, 2017 will see the re-emergence of the Nokia brand with products managed by HMD Global in partnership with FIH Mobile (part of Hon Hai Precision) and brand licensed from Nokia. As someone deeply involved with portfolio management at Nokia during the growth and glory days, I would like to take the opportunity to explore whether this is a good time for them to make a comeback?
In a previous blog I analysed the dynamics of the mobile phone market in terms of what facets of the overall business need to be optimised at a given point in time. In brief, my view is that the smart phone market has moved into a plateauing phase where the key strengths needed are brand, distribution and cost efficiency. So the question is whether this new Nokia set-up is well placed for this challenge?
First of all where is the Nokia brand today? Ten years ago Nokia was the leading mobile phone brand across the world except in North America, South Korea and Japan. This position had been built on fifteen years of growth – how much can this legacy be drawn on now? At its zenith Nokia stood for a perhaps contradictory combination of high technology and reliability – you could expect to get the very latest from Nokia and the products would be really tough in real life. The challenges of the 2008-2013 period largely stripped Nokia of the high technology association but today you still hear stories of how good and tough my Nokia was. The UK press has been full of stories about the resurrection for the 3310 over the last week, all very positive. So if I was to describe the Nokia brand today from a European perspective I would use words like: honest, tough and sentimental.
Distribution is the next major part of competing in today’s market scenario as with any fast moving goods business. Here HMD take responsibility for sales and FIH Mobile for manufacturing and logistics. This has the promise of being a good combination with a lot of personnel coming over from Microsoft devices business while FIH are of course a well-established world class manufacturer. Access to market in countries where operator distribution is critical will depend on the right deals being made but there is no obvious reason why this may not be the case. While a split company setup may struggle in a period where the market is changing fast with product innovation at the fore, since this is not the case at the moment there is no reason to believe this cannot succeed well.
Cost efficiency is the key to offering the value for money proposition essential in a plateauing market and in this case to compete against mainly Chinese companies which offer very keen price points. Clearly the advantage of the resonance of the Nokia brand will give the new venture an edge but as a challenger there can be no expectation of premium pricing at the beginning of sales. With the mobile phone chipset business dominated by only a few suppliers, the size of FIH/Hon Hai as a manufacturer will be important to get good pricing as well as the potential of Nokia branded goods making even a fraction of historical volumes.
So in a nutshell it would appear that the timing for a comeback looks good. Leaving re-entry any later would see the continuing in the decline of Nokia as a consumer brand – furthermore the operational mode of separate sales and manufacturing companies in partnership can work when product innovation is not the main route to success. 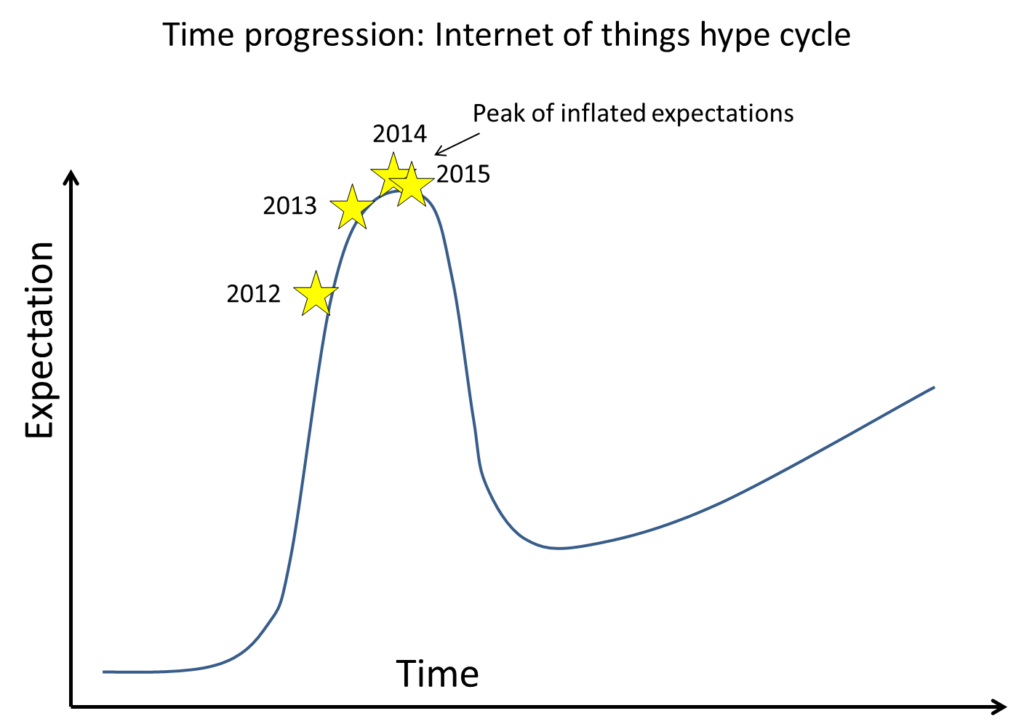 The Internet of Things (IoT) or Internet of everything, hereafter IoE, is an incredibly hyped phenomenon at present viz IoT/IoE at the peak of the hype cycle. Source: Gartner 2014, 2015.

Nevertheless, within the massively wide scope of IoE, there have been clear opportunities within selected verticals. Businesses have been deploying IoE like solutions to optimise their process and realise significant cost savings. The example I like best is “Enevo”, a Finnish company involved in waste management, often described as the “internet of shit”, which has helped waste collection companies save huge costs, circa 40% by optimising the frequency and routing of collections.

There are a wide range of industry sectors looking at IoE, but can we say that the offers and solutions really belong to the same stable, or are they so custom they should be viewed within their own silo? Right now, this situation reminds me somewhat of the “bowling alley phase” from Michael Moore’s book, “Inside the tornado” (successor book to “Crossing the chasm”). In this phase, solutions are highly customised around individual businesses’ needs and there is not a vanilla platform offer suitable for all. Happy to hear other opinions on this.

Switching tack to the consumer product angle, what potential product categories do we see where people are going to pay out for an IoE augmented experience? It is happening here:

Of course there is then the catch all of the “closed loop” internet experience, embedded into  part of an existing product category/product experience:

From a technical architecture point of view, when you consider the IoE across most of the categories, you are left with some common elements:

To this end, at All about the Product, we have decided to take a look at a few contemporary solutions for elements of the system, to build a solution and then get a sense of the different strengths of the various options  for the system elements.

We will be posting more information about our IoE product and voyage in the coming weeks. 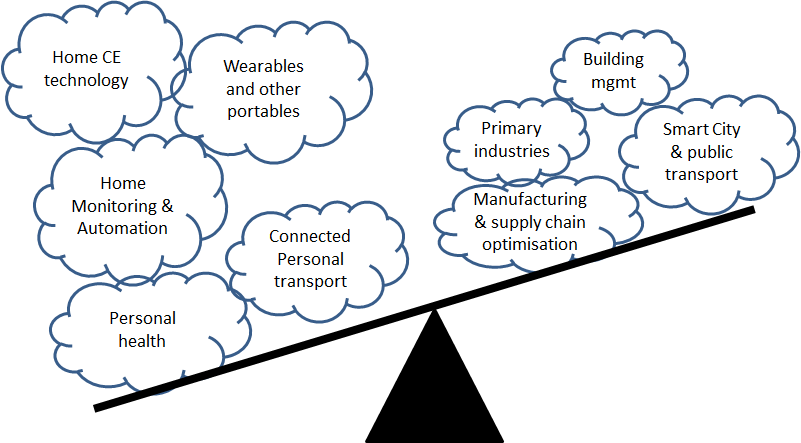 In a previous blog, we looked at the one of the issues of using off the shelf modules for IoT endpoints. The linked commercial question is what is the volume and value of the opportunities for autonomous (battery) versus powered IoT endpoints?

Given that there are going to be over 1 billion new mobile phones coming to market every year and that the majority of these will support BT smart (BT LE etc.), it is a reasonable bet that there will be a healthy market for autonomous IoT devices that are capable of interacting with these phones. The autonomous endpoints are battery powered and using the lowest energy connectivity possible. This is the IoT mobile driven market assumption.

What wisdom exists on the internet?

There are a wealth of IoT market papers and surveys out on the web and I am going to sample a couple of them, to try and make sense of the question above. Good source for different studies and forecasts:

Whilst acknowledging there are discrepancies between them, what do these reports tell us?

Guesswork.. and plenty of assumptions

If we are interested in device based business cases then the volume is in the consumer segment. Within *consumer there can be home, personal transport and personal technology.

Next, some guesswork and assumptions…

In the assumptions in the table above, “autonomous” refers to devices which are designed to operate from battery over the main course of their operation/use cases. This can refer to low interaction devices e.g. humidity sensor, temp monitor/controller as well as high rate ones e.g. a game controller.

Plugging this table of our assumptions on top of the forecasts and assumptions of others, we have 50% share for autonomous IoT devices in the consumer segment i.e. 6-7Bn devices in 2020 and value at $6-700Bn.

*I note that some reports consider devices with a “human data input” interface not to be part of IoT, but part of general internet evolution i.e. PCs, tablets and the primary usage mode of smartphones.

In many ways, I like this definition, but given the fast pace of technology evolution it seems too binary to be sustained. For example, consider a simple autonomous sensor but with a button to enable voice interaction. I believe that the voice interface will have a hugely disruptive impact on the design of and our perception of the capabilities of simple autonomous sensing devices.

Here is the link to Amazon’s Alexa offering which is available to be integrated into 3rd party devices, offering natural language parsing and the possibility to define a custom set of actions (skills kit) according to the spoken phrase. Talking toothbrush anyone?